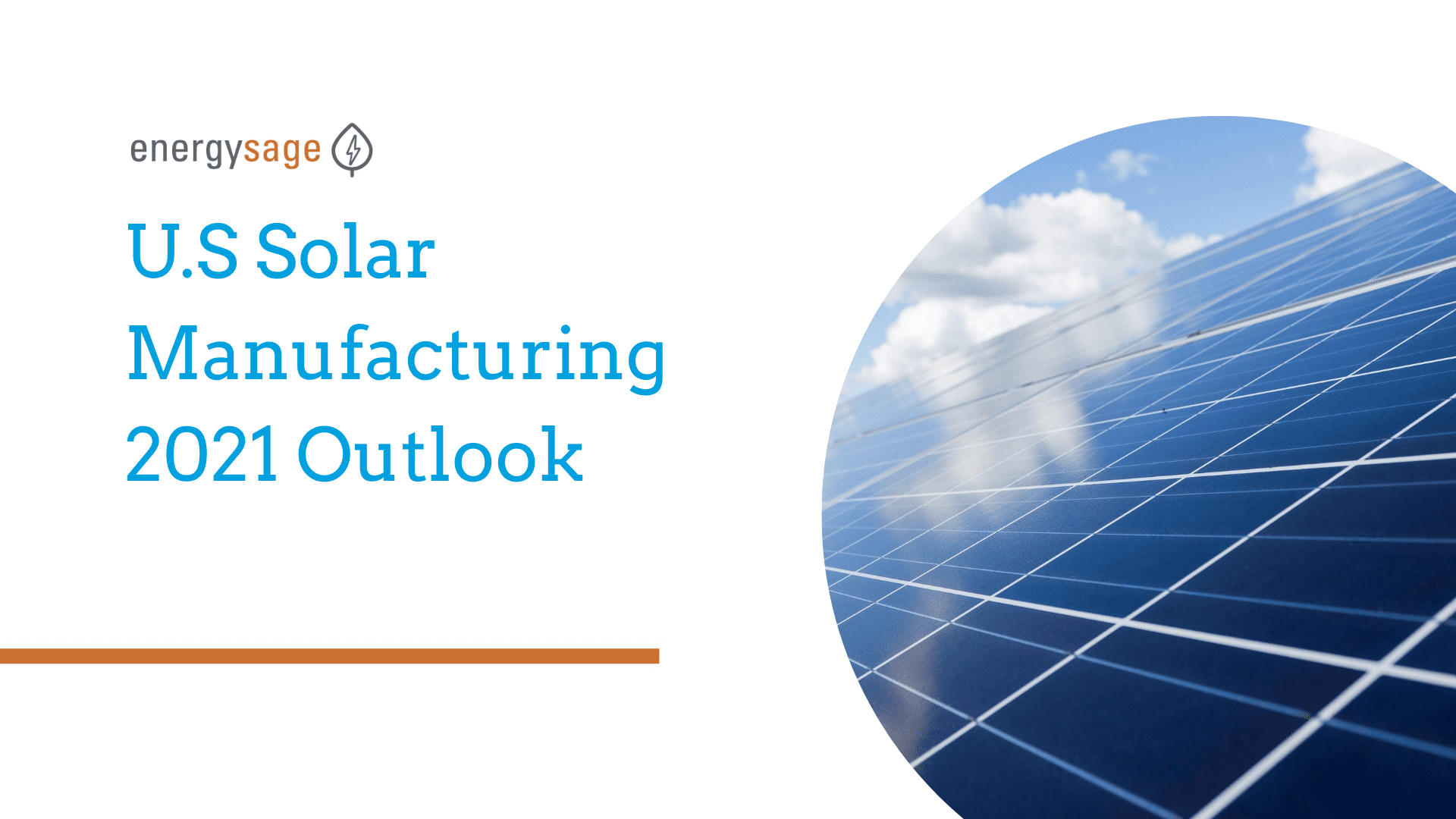 Demand for solar in the United States has increased continuously over the past decade. Here are our predictions for the country’s solar manufacturing industry for 2021.

Many things go into the process of making solar panels and installing them. Within the solar industry, different sectors are created to meet consumers and organizations’ needs — installers being the biggest driver for solar adoption and implementation. Manufacturers, however, play a large role in the United States’ stance as a champion for solar.

The United States has been at forefront of the race for efficient solar production. We currently rank 2nd in the world, after China, for photovoltaic (PV) panel production.

Many American manufacturers are making impressive progress at this moment. From innovating new technologies to expanding on U.S soil production power, they have cultivated results that are hard to ignore.

You can learn more about other notable American-made solar companies on our list of U.S solar panel manufacturers.

In March 2021, the Department of Energy announced plans to invest in future technologies outside of the crystalline silicon space (monocrystalline and polycrystalline panels). This funding will go into researching and developing perovskites and cadmium telluride thin films, alternatives to the traditional crystalline silicon we have always been familiar with.

Impact: Crystalline silicon panels account for 95% of today’s global solar market. At the moment, China holds the record for largest global solar photovoltaic and solar panel manufacturer. By allocating resources to new technological developments, the U.S may actually be much more competitive.

EnergySage is supported by the US Department of Energy (DOE) through the SunShot Initiative, a program launched in 2011 to cut solar energy costs by 75 percent. Our Marketplace helps consumers across the countries compare solar quotes from local installers.

Vietnam currently resides as the 5th biggest global solar manufacturer, installing roughly 4.8GW in 2019. Rising tensions between US and China trade war leaves plenty of opportunities for a new partnership — one that Vietnam and the U.S have quietly nurtured since the Biden administration. In 2019, both countries signed on an energy cooperation partnership in Washington to further developments in energy infrastructure and sustainable energy goals.

Shortly after, in April of this year, the two countries concluded the five-year USAID Vietnam Low Emission Energy Program (V-LEEP). The generated efforts from the program ensured stable investments for the renewable energy sector and energy efficiency compliance improvements. The United States also removed Vietnam from its list of currency manipulators. On the other hand, Vietnam is making efforts to grow U.S investments through reviewing regulations that inhibit foreign ownership limits and labor contracts.

Impact: We may see U.S solar manufacturers taking advantage of this, similar to how SunPower’s Maxeon technology panels are made in Malaysia and the Philippines, and eventually even bring more minor materials back to the U.S for assembly. First Solar has had production facilities in Vietnam for 4 years already! While this does not contribute to U.S production directly, it gives U.S-based manufacturers a larger global outreach. Depending on partnerships, exports revenue can actually follow.

Potential aside, there are also several concerns that the United States needs to address to sail smoothly in the solar energy industry moving forward.

Affordability remains one of the top concerns for both residential and commercial solar prospects. While costs have reduced over the past decades, it’s hard to see long-term benefits and savings when the bills upfront stand in the way.

Current progress: Power purchase agreements (PPAs) is a commonly sought-after solution for both homeowners who want solar for cheap and low-maintenance and large corporations, like Google, to meet energy clean energy development goals.

The Biden administration made news in September with the ambitious goal of powering up to 45% of the entire country’s electricity by 2050. Billions of dollars in incentives and high tariffs from past administrations have made the challenge even more difficult.

The United States would have to compete with China’s cost leadership through the latter’s many generous government subsidies and reciprocating tariffs.

Current progress: Free trade is a value that EnergySage strongly believes in. There is a great amount of controversy on whether the ban on solar imports like silica from China would slow down the plan to advance renewable energy.

As of right now, the heavily impacted areas concern crystalline silicon solar production. Thin films PVs, perovskites, and future replacements may just be what we need. The Department of Energy is committing to roughly $128 million for the next decade to support cost reduction, performance improvement, and new tech deployment.

What this means for U.S consumers

There are plenty of opportunities for the United States to gain a stronger foothold in the global solar industry. Progressive policy changes, continuous investment in R&D, growing adoption for renewable energy — all count towards making the world a little better.

At EnergySage, we pride ourselves in pioneering efforts towards a sustainable energy future. Through our platform, interested homeowners can educate themselves and find affordable solar quotes through vetted local solar installers. You can get started today by calculating how much you can save on solar with our Solar Calculator.